“To heal” is the central verb of the first visit by a pope in Myanmar. In the first part of his 21st international journey, that continues in Bangladesh, though without ever explicitly mentioning the Rohingya, Francis urges to be witnesses of peace and reconciliation by putting aside anger and vengeance and using the healing balm of mercy, which is what the small, albeit lively, Church of Myanmar does, and which is what Buddhists and Catholics have the power to do, walking side by side, if they learn from Buddha and St. Francis. The future belongs to the young. To the Bishops, he said: make your voices heard in defence of human rights and democracy

Healing the wounds, the visible and invisible ones, with the balm of mercy. This encompasses the path of peace, reconciliation and forgiveness; it’s the only antidote to anger, revenge, and to the denial of human rights. Francis, the first pope to visit Myanmar – a country with a Buddhist majority on a population of over 52 million, where Catholics represent 1.7% of the population – avoided mentioning the name of the Rohingya minority. But surprisingly, his first gesture upon his arrival in Yangon, on a day that should have been devoted to resting after a long journey, was to hold an early meeting with Myanmar’s army chief Min Aung Hliang. “They discussed the great responsibility of authorities of the country in this time of transition,” Vatican spokesman Greg Burke told journalists describing the content of the meeting of 27 November, originally scheduled for the 30th.

Peace for everyone, none excluded. The first public event of the 21st international apostolic journey of Pope Francis, held on November 28th, after the private meeting with religious leaders, was the meeting with Aung San Suu Kyi, daughter of General Aung San, Secretary General of the Communist Party of Burma killed by political opponents in 1947, Nobel Peace Prize laureate in 1991, incumbent State Counsellor and Minister of Foreign Affairs. 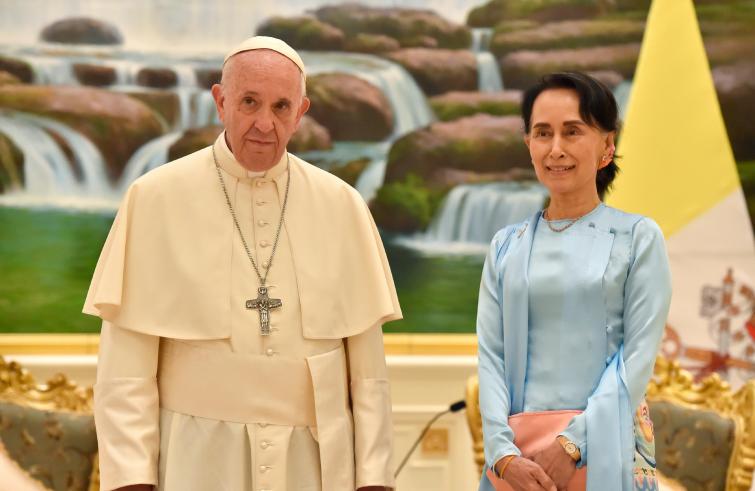 “The future of Myanmar must be peace, a peace based on respect for the dignity and rights of each member of society, respect for each ethnic group and its identity, respect for the rule of law, and respect for a democratic order that enables each individual and every group – none excluded – to offer its legitimate contribution to the common good.”

While not explicitly mentioning the Rohingya, Francis pointed out that the process of peace-building and national reconciliation can only advance through a commitment to justice and respect for human rights. By working together, in a spirit of harmony and mutual respect, Burmese religious communities can play an important role in this process, especially in the healing of the emotional, spiritual and psychological wounds of those who suffered in the years of the conflict. 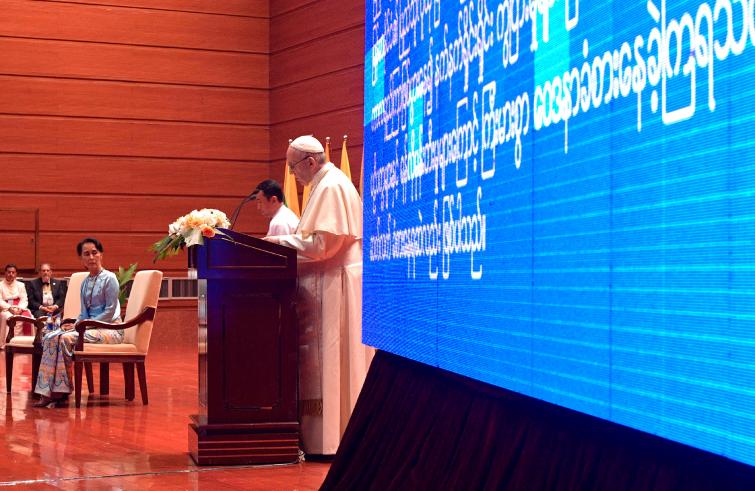 In Myanmar, “the future is in the hands of young people”, the Pope said in the final part of his speech to authorities and the diplomatic corps, highlighting intergenerational justice and the right of “future generations” to “inherit a natural environment unspoilt by human greed and depredation.” 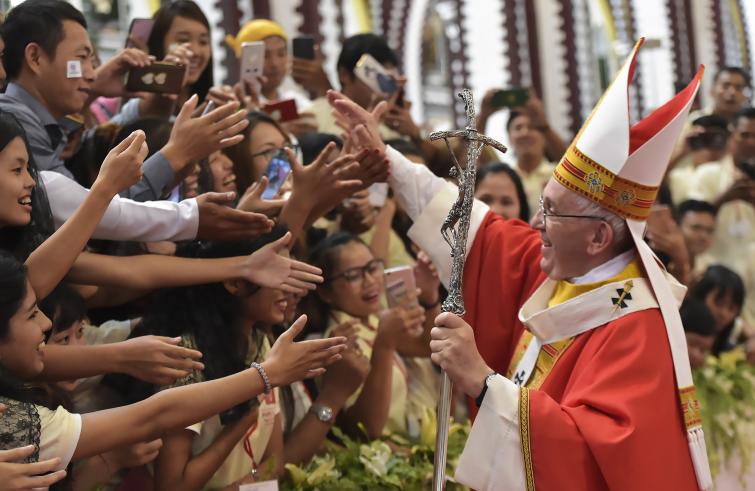 To young people was dedicated the Holy Mass of November 30th at St. Mary’s Cathedral, chosen by the Pope as the closing event of his journey to Myanmar. “As a loving ‘father’ (or better, a ‘grandfather’!), I don’t want you to wrestle with these questions alone”, Francis assured them, urging the thousands of youths standing inside and outside the church, arrived from all corners of the Country, not to be afraid to learn from their mistakes and to speak out; not to be afraid to “make a ruckus”, but to speak out loud with their life and their hearts. 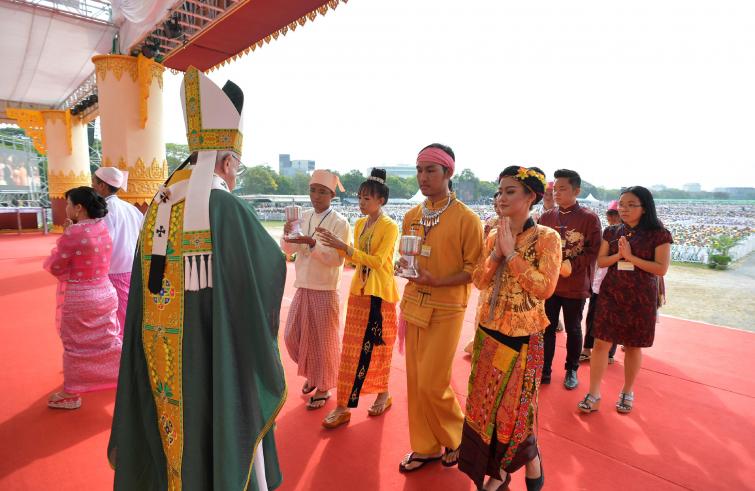 The wooden stick of Rakhine refugees. The Kyaikkasan Ground of Yangon is a 60-hectar park, where young people usually practice some thirty different sports. Countless numbers of people crowded the area to attend the Mass of November 29. As he spoke, the Pope leaned on a wooden stick given by the Rakhine refugees, where the majority of the Rohingya people fled from.

Being “witnesses of reconciliation and peace” requires rejecting violence and embracing “the healing balm of mercy” instead: this was the central message of Francis’ homily in the presence of 150 thousand Catholic faithful who arrived from all over the Country, with every means of transport, some even by foot, to see the successor of Peter at least once in their lives.

Jesus’ Cross is the source of healing. To heal the wounds of violence, wounds both visible and invisible, the wounds of a 50-year conflict, we must learn from the small Church of Myanmar, a thriving Church despite her small numbers, that is helping many men, women and children, regardless of religion or ethnicity.

The love of Jesus – the Pope said – is “like a spiritual GPS” that guides us towards the heart of our neighbour. 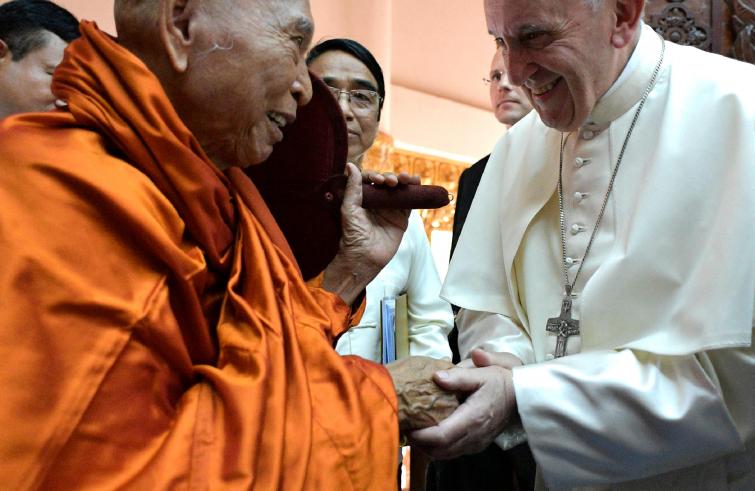 Never grow resigned. “Never grow resigned” to the wounds inflicted by conflicts, poverty, oppression. It’s the joint commitment of Catholics and Buddhists in the words spoken by Pope Francis during the meeting with the Supreme Sangha Council of Buddhist Monks at the Kaba Aye Centre in Yangon, a symbolic site of Theravada Buddhism and one of the most venerated temples in South-East Asia.

To “advance peace, security and a prosperity inclusive of everyone”, it is necessary to ensure that “every voice be heard”, said Pope Francis, who pointed out that the values of the Buddha, as those of Saint Francis, are essential to the integral development of society. Walking together along this path of healing, and working side by side for the good of everyone who lives in this land”, was the final wish. 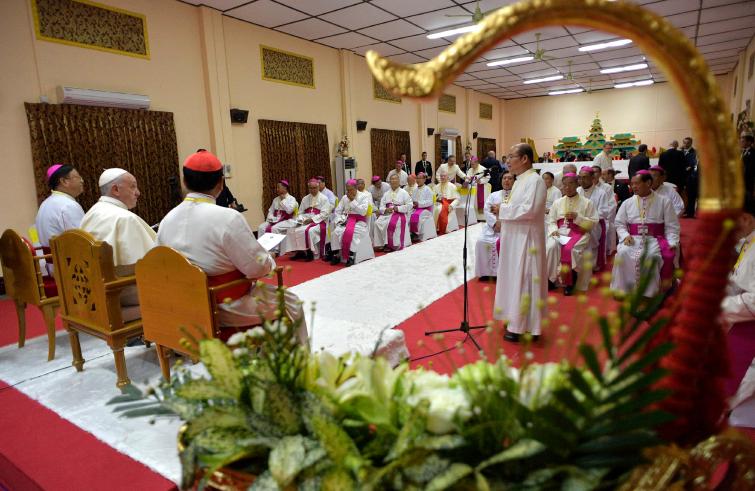 Defending human rights. In unscripted remarks, during the meeting with the bishops in the archbishopric of Yangon the Pope said that the Church is a field hospital and that the mission of Burmese prelates is “to heal.” In view of the upcoming Synod, Francis called upon the clergy of Myanmar to “accompany the young.” To pray and take care of “spiritual health”, he said to the bishops, inviting them to make their voices heard when it comes to issues of national interest – such as the defence of human rights and democracy – along with environmental protection. Also at St. Mary’s Cathedral Francis had called upon the young to include among the major gifts also the “enthusiasm for human rights”, for justice and for peace.