The Apostolic administrator of Estonia, Msgr. Philippe Jourdan, is presently in Rome with Marge-Maria Paas, postulator for the diocesan phase of the beatification cause. He spoke about his predecessor, Mons. Profittlich (1890-1942), born in Germany, who died of cold and diseases in Soviet prisons before his death sentence was executed. All the material regarding the beatification process of “the first bishop of Estonia after the Lutheran Reformation” was transmitted to the Congregation for the Causes of Saints on Monday March 18

Archbishop Eduard Profittlich “could be the first Saint of the Catholic Church in Estonia. This is extremely important and significant to us.” The Apostolic Administrator of Estonia, Msgr. Philippe Jourdan is presently in Rome with the postulator for the diocesan phase of the beatification cause, Marge-Maria Paas. He spoke about one of his predecessors, Mons. Profittlich (1890-1942), born in Germany, who died of cold and diseases in Soviet prisons before his death sentence was executed. All the material regarding the beatification process of “the first bishop of Estonia after the Lutheran Reformation” was transmitted to the Congregation for the Causes of Saints on Monday March 18.

What is the significance of the figure of this archbishop and martyr in today’s Estonia? Only living for some time in Estonia enables to grasp its significance. In many ways it represents the Church’s recognition of that tragic historical period, when 20% of the overall population was deported to Siberia, and where many of them died. Archbishop Profittlich died as a result of his decision to share the tragic destiny of his people. The heart of all of this is not only the archbishop in himself but also that dramatic period in Estonia. That’s why his figure bears deep significance not only for the small Catholic community but for the whole of society. Special interest was shown also by public authorities.

It’s not a form of policy-making or an accusation: we are aware that the Russian people have experienced deep suffering, perhaps an even greater suffering than the Estonian population in those years. At the same time, we cannot forget all those who gave their lives in that period.

At personal level he was a man who had the possibility to leave Estonia and avert all the dangers. Yet, in full awareness that he risked losing his life, the archbishop decided to remain. This is exemplary.

What is the present stage of the beatification process?
The process was initiated in 2003, although efforts in this direction had been ongoing since the 1990s. The diocesan stage – the stage of research – lasted 16 years. Now we are hoping that it will go forward. I spoke about it with the Pope last year in Tallinn. The Pope took an interest in the matter also because the late Archbishop was a confrere of the Holy Father, a Jesuit. The postulator of the Roman section of the cause is the postulator general of the Society of Jesus. The cause is presented by the Apostolic Administration but the Society of Jesus offers us the support of extremely qualified experts.

Major historical developments, occurred since then, but still today the atmosphere with Russia is not without tensions…
Indeed ,the relations have changed but they are not yet marked by full serenity. Of course it would be wrong to say that Russians and Estonians hate each other.  Politics and politicians – with their declarations and demands – are one thing, while the integration of Estonians into Russian society, which is extremely positive, is another matter. There is no hate between the two peoples. However, we see a situation of tension that runs across all of Eastern Europe, reflected especially in Baltic Countries, notably in Ukraine.

From this perspective people are afraid of the future, they don’t harbour feelings of hatred but concern. In fact, although nobody wants a war to break out, political leaders sometimes play games with situations. This cannot be changed but we do our everything possible for the unity of society and for peaceful coexistence. 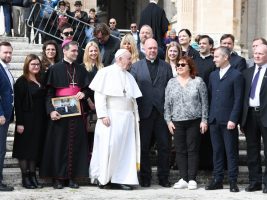 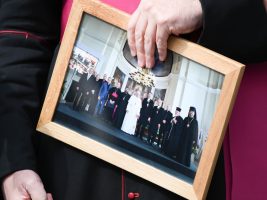 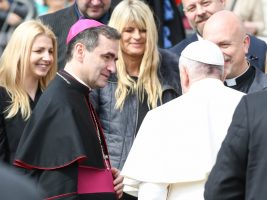 The Pope visited Baltic countries, Tallinn, six months ago, on September 25, which signs did his passage leave behind?
The memory of the visit is still very vivid; it drew many people close to the Catholic Church. Many have asked to undertake a path of baptism to enter the Catholic Church. The general perception of the Catholic Church – on the part of Estonian people as a whole – has changed. The Catholic Church used to be perceived as distant in space and time. Now a large majority see the Church  – and the Pope in particular – as closer and contemporary, this is very important for the future of the Church. A few days after the Papal visit a Lutheran theologian told me: “Now the Estonian people will no longer be described as atheist.” Everyone acknowledged the success of that visit, interpreting is as a greater expectation of spirituality and faith that had been previously imagined.

Six months later you came to Rome as a group to attend the audience of Wednesday March 20 in St. Peter’s Square…
It was a beautiful experience. I was with a group of twenty people who helped organize the Pope’s visit to Estonia to give thanks for that visit and greet the Pope: he said he was very pleased with the outcome of the visit and I was very happy about it. The group included the Lutheran bishop of the church of Tallinn that hosted the meeting with young people. The Pope was very pleased to see him again. We gave him a beautiful picture of his meeting with young people on behalf of the Ecumenical Council. The Pope said ‘see you next time’, but he did not specify when. I also asked him to pray for Estonia because we are going through a delicate period, following the recent elections. He said he had read about the elections and that he would pray. He added: “Things will move forward.” The Pope is informed about everything, he did not forget the small Country of Estonia.

Indeed, the political elections of March 3rd were somewhat disruptive and the nationalistic party gained more votes than expected…
We should not exaggerate. I asked the Pope to pray because political life has grown embittered over the past weeks, strained by accusations and insults that were unheard in 25 years of freedom.

The growth of nationalist movements is partly linked to forms of fear of migrants. Although the latter represent a small percentage in our Country this phenomenon should be read against the backdrop of a Country that during Soviet rule was invaded by hundreds of thousands of people sent by the Soviet powers to Estonia to work, unasked by the Estonian people..

It is also linked to social issues that were perceived as having been imposed by the outside, by Brussels. One such example is the question of marriage that some people perceived in a negative way, although the majority of Estonians know how to distinguish. While nationalists have grown, they represent a small percentage compared to other Countries such as Italy or France, and I don’t think that Estonians would call into question their relationship with Europe.