On August 23 Angola’s population went to the polls to elect the new President and the new Parliament. The governing MPLA party won again, in power since Angola gained independence in 1975. But there’s a new President-elect: Joao Lourenço, ex Minister of Defence, heir apparent of outgoing President Edoardo Dos Santos who governed the Country for 38 years. A snapshot of Angola’s scenario …

The recent elections in Angola saw the presidential election of Joao Lourenço, 63, ex Minister of Defence of the People’s Movement for the Liberation of Angola (MPLA). Lourenço replaces outgoing President Edoardo Dos Santos, who ruled the Country for 38 years. The MPLA obtained the absolute majority of the 220 Parliament seats. Hence there were no major changes, except for the President, who is bound to be well received by the international community, including Italy, from which Angola purchased weapons amounting to over 88 million EURO last year, according to the blog Africa ExPress. Angola – 28.8 million inhabitants with a pro capita GDP of 3.110 $ in 2016 – is one of the three strongest economies in Africa, along with South Africa and Nigeria, thanks to the proceeds of resources such as oil, diamonds and natural gas. Angola is Africa’s second top oil producer after Nigeria. But wealth is concentrated in the hands of a few. What can be best described as an extremely wealthy and corrupt oligarchy owns oil and telephone companies, exerting strong control of the media and civil society, whose freedom of expression and organization is foiled. The empire of the outgoing president’s daughter, among the richest women in Africa, at the lead of the State oil company Sonangol, is renown. Her brother, José Filomeno Dos Santos, runs the State’s oil fund. The luxurious neighbourhoods and infrastructures of Angola’s capital Luanda, built thanks to the good relations with China, loom over widespread poverty that make up 36% of the population, especially in the rural areas. 26% of the overall population are unemployed amidst high gender inequality and poor sanitation systems, while quality education can be accessed only by wealthy brackets. The situation is further worsened by the consequences of the economic and financial recession. After years-long GDP growth, the drop in oil prices in 2015 (from 51 to 37 dollars in 2015) caused inflation to peak to 40% in 2016. 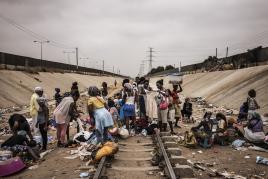 Second-rate education and healthcare. “A large segment of the population is marked by low education levels coupled by major difficulties in accessing healthcare and social services”, local sources – that asked for their identity to be kept confidential – told SIR. “Hospitalized patients are required to bring medicines and syringes because hospitals do not provide them. Medical care is provided only in very expensive private health clinics. Male chauvinism is widespread, in rural areas men do practically nothing while women are treated like slaves, forced to take care of everything; public education is second-rate, the children of the rich enrol in very expensive universities or continue their studies in Portugal, while entrance in the job market is governed by nepotism.”

Social control and poor freedom of the press. There is also the problem of social control: over the past years TV networks and other media outlets were a single voice in celebrating the achievements of the government and of the dominant party MPLA. All forms of dissent have been silenced (especially when addressing the theme of corruption), the activities of local NGOs are strongly obstructed, the government releases distorted data, dissent is crushed. Some twenty people were arrested in 2015 simply because they were reading a book on “tools to destroy a dictator and avoid a new dictatorship.” They were released after several months as a result of international pressure. “The government’s control extends as far as the villages, in the most harmless circumstances – they said. Sometimes we realized that spies had infiltrated our courses on informing people not to drink contaminated water. At the most, it is possible to raise doubts, asking to improve the performance of public institutions, hampered by too many delays and red tape.

But one should never criticise the government in public.”

Elections, predictable outcomes. As a result, also political outcomes didn’t come as a surprise, despite the growth of the two main opposition parties – Unita and Casa-CE – that disputed the results. “The vote of those working in public administration is controlled, officers are compelled to financially contribute to the MPLA election campaign, while the 5 international observers tasked with closely following the electoral process had already been selected by the outgoing President – they said -. Strangely enough, in a Country where the population majority has no ID Cards, everyone received their polling cards.

Thus it was already known who would win. Also because after years of civil war people are afraid of reliving a situation of instability.”

President-elect Joao Lourenço said he intends to meet the major social and economic needs of the Country, “in the framework of democracy, human rights, and defence of fundamental freedoms.” It is widely believed that given the present circumstances priority should be given to a set of issues, namely, “the fight on corruption, coupled by measures to diversify the economy, investing also in the area of tourism that is presently thwarted by a highly restrictive visa policy involving high-costs and hard to obtain.” But there is also a positive aspect: “critical thinking is growing among highly-educated segments of the population.”